So I remember when I was consulting one of my female clients, during the middle of our online consultation, she asked..

| Are soy products safe to consume for females?

It wasn’t a new question for me to be asked during my counselling, but I realised that people are always confused with soy consumption.

Since, soy is widely consumed, not only as a source of plant-based protein but also as an ingredient in many processed foods.

However, soy remains a controversial food — some praise its health benefits, while others claim it could be bad for you.

For vegetarians, vegans, and other dieters who have come to rely on this common meat alternative in their diets, grocery store items rich in soy have developed scary reputations for a purported “disease risk.” Some previously published research can be downright scary, with claims that increased soy can mess with your hormones, the thyroid, and possibly cause cancer.

So which side of this debate is actually right???

— does soy deserve that health halo, or should you swear the stuff off of your shopping list for good?

As is often the case when it comes to nutrition, the answers aren’t black and white. But for the most part, “Soy-based foods are some of the best foods you can eat on the planet.”

Soybeans are a type of legume that can be eaten whole or processed into a variety of forms. Soy includes a wide variety of foods, including edamame, products made from whole soybeans, fermented soy foods, more processed soy-based foods, as well as supplements.

Soy is high in plant-based protein and a good source of many nutrients and phytochemicals.

Can check the nutritional value:

It’s important to think about all foods in context. Eating plant-based foods in their closest-to-nature (a.k.a. least processed) form? Super nutritious. While taking supplements made with the compounds in soybean? Not so much. 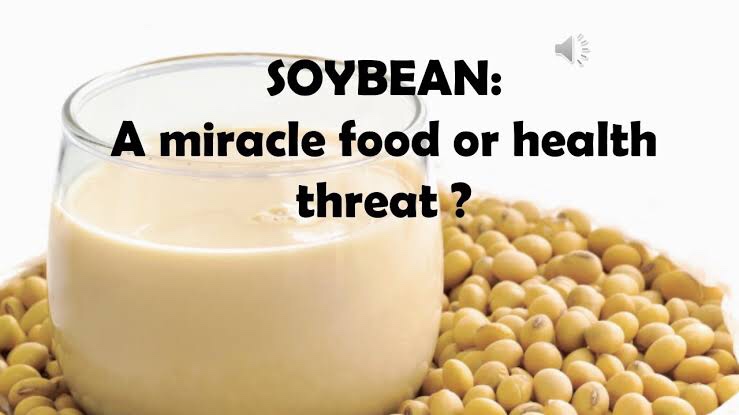 Does eating soy affect your hormones?

The controversy around soya comes down to its uniquely high content of isoflavones. These compounds have oestrogenic properties, which means they act like oestrogen, the primary female sex hormone, and bind to oestrogen receptors in the body – and have been blamed for raising the risk of breast cancer (as well as prostate cancer for men). But is this really the case?

Experts still don’t know everything there is to know about soy. But research in recent years suggests that moderate consumption of minimally processed soy foods not only isn’t bad for you, it probably has some benefits. Here’s how the unique phytochemicals in soy may offer several health advantages.

Fiber seems to play an important role in the cholesterol-lowering effects of soy. The soy with fiber reduced LDL (bad) cholesterol more than twice as much as soy protein alone.

Soy appears to be beneficial for fertility, as long as you don’t eat too much.

Women who ate soy before in vitro fertilization (IVF) were more likely to have a successful pregnancy than those who did not.

Isoflavones are a class of phytoestrogens found naturally in soy that acts as a weak estrogen in the body.

Estrogen levels decrease during menopause, leading to symptoms like hot flashes. Since soy acts as natural estrogen, it may help reduce these symptoms.

Soya’s benefits also depend on the type we consume. Isoflavone content varies in unprocessed soybeans, such as edamame beans, compared to processed soy foods – and the closer the food is to the soybean, the higher its isoflavone levels.

The only thing I can say is that its safe to consume soy foods in amounts consistent with Asian diet, including tofu, fermented soy foods and soymilk, but studies shown that the more soya is processed, the lower the level of isoflavones, which we think are protective elements.

Even so, the like-mindedness clearly indicates health benefits from eating soya – even if that’s simply because it replaces unhealthier foods.

Soy processed like meat analogs, soy bars, soy yogurts, or protein powders usually only contain soy protein isolates, rather than nutrition from the whole soybean, are lower in nutrient density.

As for how often you should eat soy? As with all foods, moderation is the way to go.

Hi, I'm Priyanshi! As a Holistic Nutritionist and as a leading voice in mindful nutrition, my purpose is to teach you how to take care of yourself using simple sustainable mindful eating and living practices so you feel empowered, balanced, and at ease. In my teachings, you'll learn both the science of nutrition and the art of healthy eating so you design a way of to eat for healthy mind, body & soul that's unique to you. At detoxpri, the meaning of good health is a combination of nutrition and fitness, which are essential to your well-being. View more posts

3 thoughts on “Confused about eating soy? The Good and the Bad”